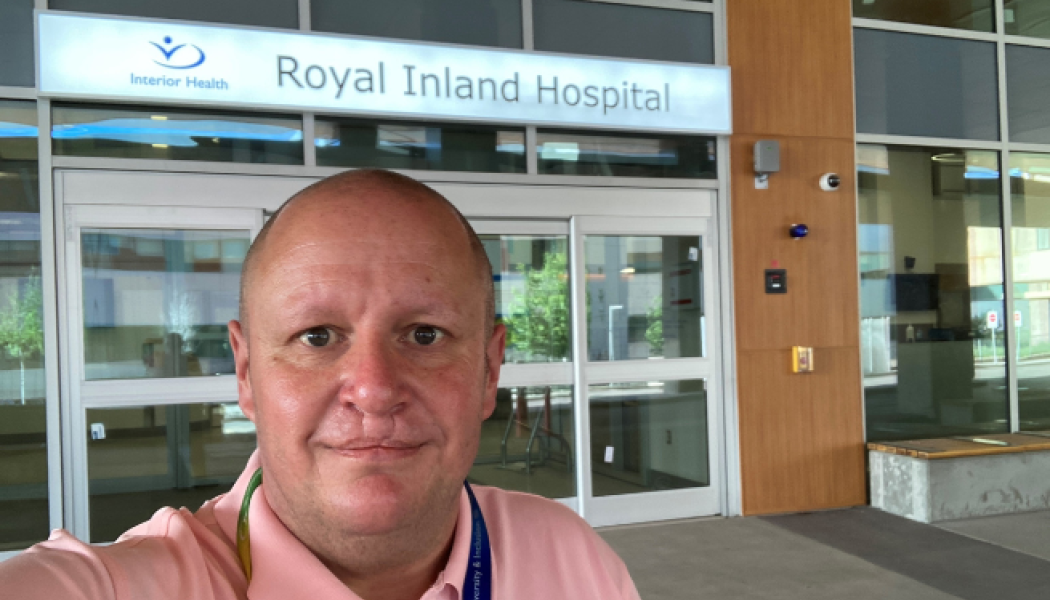 When Peter Renn woke up from the second coma he had slipped into in two weeks, he was at Royal Inland Hospital (RIH) in Kamloops, disoriented, scared and, according to his physician, near death.

A Kamloops resident, Peter had cirrhosis of the liver, brought on by a rare, inherited disease. Without a transplant, he was told he would likely die.

It was 2018 and the end of a 10-year journey of visits to various hospitals. By his count, nine times he was close to death. However, this time, everything had gotten worse. Twice he slipped into a coma. Awake in RIH, he was disoriented and fearful for his life - scared of losing his wife and his two young children.

“At that point, I was rock bottom,” he says. “I didn’t know whether I would live or die.”

After he was transferred from the ICU, his care was supported by other Interior Health teams. First, a student nurse calmed his fears with compassion and caring. Like an angel, she asked him what his three wishes would be if he could have them. He replied that he wanted the feeding tube gone, he needed water and he wanted to return to his family.

[The student nurse] was my saving grace. I was scared. I was in a dark place. She had such compassion. It really inspired me. When I woke up at RIH, the nurses were great. They pulled me through to a point I was able to function . . . just by talking to me and being so caring. I was really moved.

The rest, as Peter says, is history.

He was so inspired by the care he received that he vowed to enter health care and begin helping people. Having emigrated to Canada from London, Peter had spent 26 years in the construction industry.

“Going back to school to become a Registered Nurse wasn’t really an option,” he laughs.

Soon, fate would put a job posting for Interior Health Capital Planning & Projects in front of him.

He interviewed for the position, told his story, and was soon working in the same halls where he was once near death as one of the project managers on the Phil & Jennie Gaglardi Tower in Kamloops. Four years after his transplant, he is back to health. His kids are growing. He and his wife are part of the Kamloops community.

And now, he is giving back in his own way, working with IH’s Capital Planning & Projects team at Royal Inland Hospital: his hometown hospital.

Peter is among the multidisciplinary team RIH Gaglardi Tower Project team, which includes project managers, nurses, equipment buyers and representatives from protection services, finance, maintenance, information technology, infection prevention and control and more. The team connects to RIH leadership, staff and physicians and has been collaborating through thick and thin to prepare the new tower to open July 18.

The Gaglardi Tower will be a modern hospital that will allow those same health-care professionals who saved Peter’s life to work in one of the best hospitals in Canada: a building to match their immense skill and compassion.

"Working as a project manager on the Gaglardi Tower has been the most inspiring project I have done. It has given me a better sense of the community we have here at RIH," Peter says. "The staff and physicians are incredible. What they do for patients every day is astounding. This Gaglardi Tower is going to have a big impact on the community for both patients and staff. And I’m so proud to be a part of it."

Once the Phil & Jennie Gaglardi Tower opens to the public, Phase 2 of the project will become the focus of Peter and the Gaglardi Tower Project Team’s work, including a significant renovation to the Teck emergency department, pediatrics, post-anaesthetic recovery and the morgue.

For Peter, and the rest of the project team, it is part of what they do every day. Modernizing hospital facilities, bringing care spaces up to current standards, supporting people’s health, helping people.

Sometimes he walks past the ICU where he awoke that day, and emotions flood back.

“If I ever need to get inspired about why I am doing what I do, I take a walk through ICU and go past that room I woke up in. It gives me a sense of empathy and a feeling that I am in the right place. Everything that has happened to me with my health has led me to this point,” he says.

If it wasn’t for the Interior Health doctors and nurses over the years and the amount of times I had been in and out of hospital, I wouldn’t be where I am today. The countless hours they spent with me, just to keep me where I am today – I can never repay that. Doing what I do now is the next best thing.