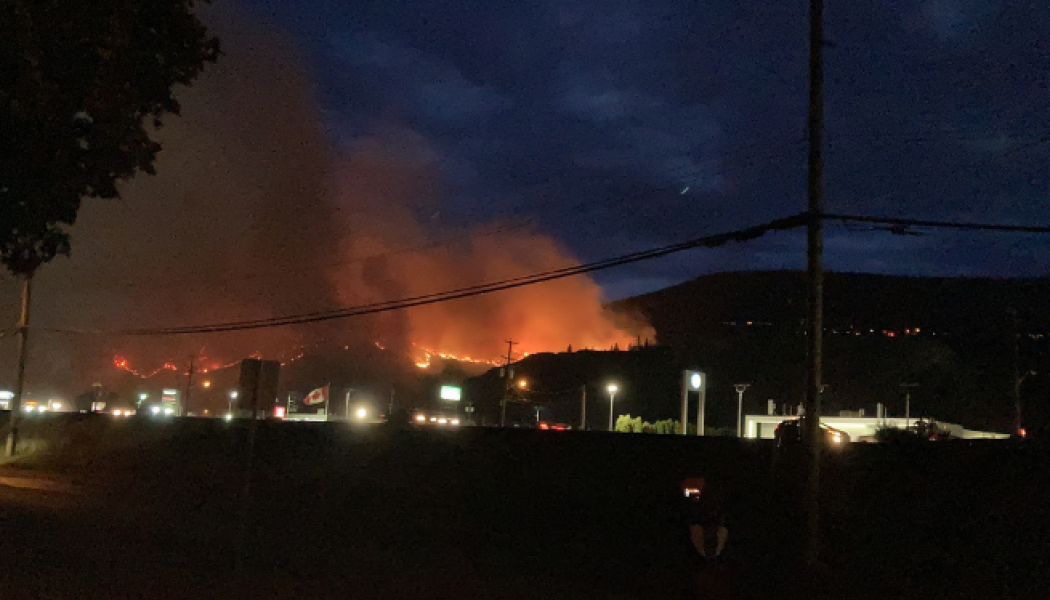 Canada Day is often celebrated around Canada with fireworks. In 2021, Mother Nature provided a light show in the form of a lightning storm for those living in the Juniper Ridge and Valleyview neighbourhoods of Kamloops.

A wooded area below the ridge appeared to have ignited from the lightning and fire quickly spread towards homes in Valleyview, leading to tactical evacuations of homes under threat and Kamloops Fire Rescue calling out every available firefighter to work.

Fortunately, no homes were lost during the incident, but for Karen Cooper (pictured below), Clinical Operations Director in the Thompson-Cariboo Shuswap area, and Juniper Ridge resident, it was a jolt into action.

Within minutes of the lightning strike, neighbours texted her to be ready to leave. Having been incident commander on the Lytton fire for her job at Interior Health just the day before, Karen had a “go bag” packed already, and had her son do the same. As such, they were able to act quickly and drive out the lone egress route before the congestion that followed.

“Driving down the long hill looking at the 50-foot walls of flames moving rapidly towards my home was terrifying, and yet hearing later of folks who crept down the hill, taking over two hours to get to safety, made me so grateful for the preparation done just hours earlier. I missed key items, such as my passport and some of my important papers, but I learned a lot and updated my “go bag” items accordingly. I didn’t unpack that bag until December, not wanting to let go of the potential need for it after such a long season of maintaining readiness.

“Lastly, I reached out immediately to my team for support through a group text. I was able to hand off being incident commander, and received many welcome words of encouragement from my peers. Knowing I had covered off my work, had a place to go and that my loved ones were safe was so critical to dealing with the immense stress of the situation.

“I cannot overstate the importance of having a plan, an egress route, a “go bag” and your circle of support people identified in advance of an emergency situation.”

In 2021, the B.C. Interior region experienced a natural disaster season like none other. Interior Health staff stepped up and came together to support each other, patients, friends, family and communities. We’re sharing the stories of staff members reflecting on how being prepared – at home and at work – can make all the difference when minutes matter.

View more stories in the series

2 Minute Read
Community & Culture
Continence: The taboo topic we need to talk about

Nearly 10 per cent of Canadians have a condition that seriously impacts their quality of life, causing social isolation and withdrawal. It’s a…

Mother Nature is glorious but fickle – we never know what she is going to hand us. Folks in the Chilcotin are known to be resourceful and…