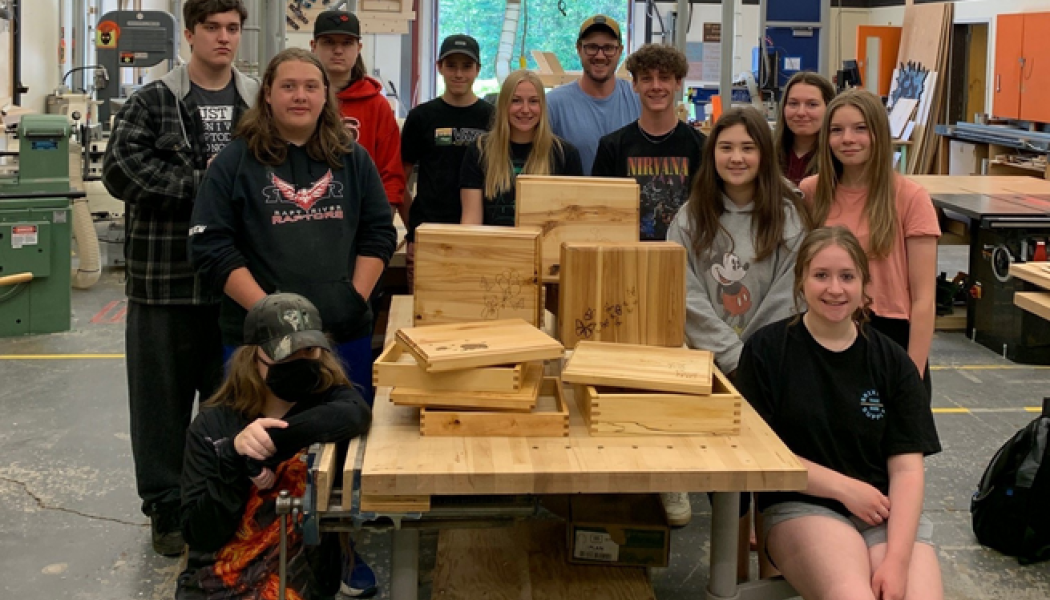 A short lifetime of memories are attached to a project undertaken by Clearwater woodwork students last spring for grieving parents at Royal Inland Hospital.

For the students who carefully handcrafted the beautiful memory boxes, it taught knowledge and skills and also compassion in the face of deep sorrow.

For parents leaving the hospital with only memories of a baby, it provides a beautiful, engraved keepsake – a place to store tangible remembrances like photographs, clothing or tiny hand and foot prints.

Clearwater secondary school teacher Dayton Fraser was first approached about the woodworking project by a colleague whose daughter, Keira Geiger, was a nurse working on a preceptorship (practical experience and training) in the obstetrical unit (OB) at Royal Inland Hospital (RIH).

The idea was to build memory boxes and donate them to the hospital where they could be given to parents going home with only a broken heart.

Dayton, who is always on the lookout for projects that will engage students and teach them their craft, eagerly embraced the concept.

“It was a great project for our senior woodworking students. It got them on every machine from table saws to lasers for engraving and it gave them insight into life circumstances,” he said.

“It’s such a tragedy to lose a child and these students were really motivated to build a beautiful keepsake that these parents would be able to cherish forever.”

Fifteen students participated in the project and they did an “awesome job.” Each one is engraved with a butterfly and some other design, such as a baby toy or teddy bear.

Dayton said it took longer than anticipated and not every student completed their box, but those boxes will go into the inventory for next semester.

As the project progressed, Keira completed her preceptorship and Dayton remained in contact with the OB clinical practice lead, Val Kloska. In July, she was excited to get a call from him, saying he was ready to drop off the first instalment of the memory boxes.

“It was such an amazing project for both the school and the obstetrical unit,” said Teressa Allwood, clinical operations manager, maternal and child services. “These memory boxes will support our families during the hardest times of their lives.”

The project will continue during the next school year and be more streamlined.

“I’ve been able to fine-tune the process for next year. The first time I do a project, I’m learning the whole time,” said Dayton.

The project also epitomizes community, which is important for Dayton as a teacher.

The wood came from the property of a retired doctor, known in Clearwater as “Dr. Bob” (MacKenzie).

During COVID when students were not in school – with Dr. Bob’s consent – social studies teacher Sylvain Menard and Dayton took down the trees, which was on the path of the Trans Mountain pipeline. Dayton, metalwork and automotive teacher Bryn Leary, and retired woodworking teacher Brent Buck milled it with Brent’s portable sawmill.

Dayton views the memory box concept as reflective of the philosophy he learned from his predecessor, Brent.

It is now recognized nationally, marked by the colour orange. But Orange Shirt Day has deep-seated meaning for Kukpi7 (Chief) Willie Sellars of…

The other day, Jered Dennis heard something alarming – in one South Okanagan secondary school, it was estimated that at least half of the students…

3 Minute Read
Community & Culture
We Are IH: Vernon rehab assistant is on the trail to achieve her goals