Ktunaxa Nation cultural educator Jared Basil presents a drum to Interior Health’s Shannon Statham, at a Ktunaxa Nation drum ceremony at the newly opened Cranbrook urgent and primary care centre. A welcome to the building in Ktunaxa language is on the front door, the exterior sign, and other places in the facility.

For as long as he can remember, Jared Basil has loved to dance.

Every May long weekend, dressed in full regalia, he dances to the drums of the Lower Kootenay Band at its annual Yaqan Nukiy Pow Wow.

In elementary school he remembers being jeered by classmates as he danced during presentations. But dancing keeps him grounded; connected to his culture and to the Ktunaxa Nation.

“Dancing has always been in my life. It’s something I have always been able to showcase without fear of animosity. When the drum is going...the drumming is meant to represent the heartbeat of Mother Earth, so when you are connected and grounded to that, sometimes it feels like nothing else matters.” 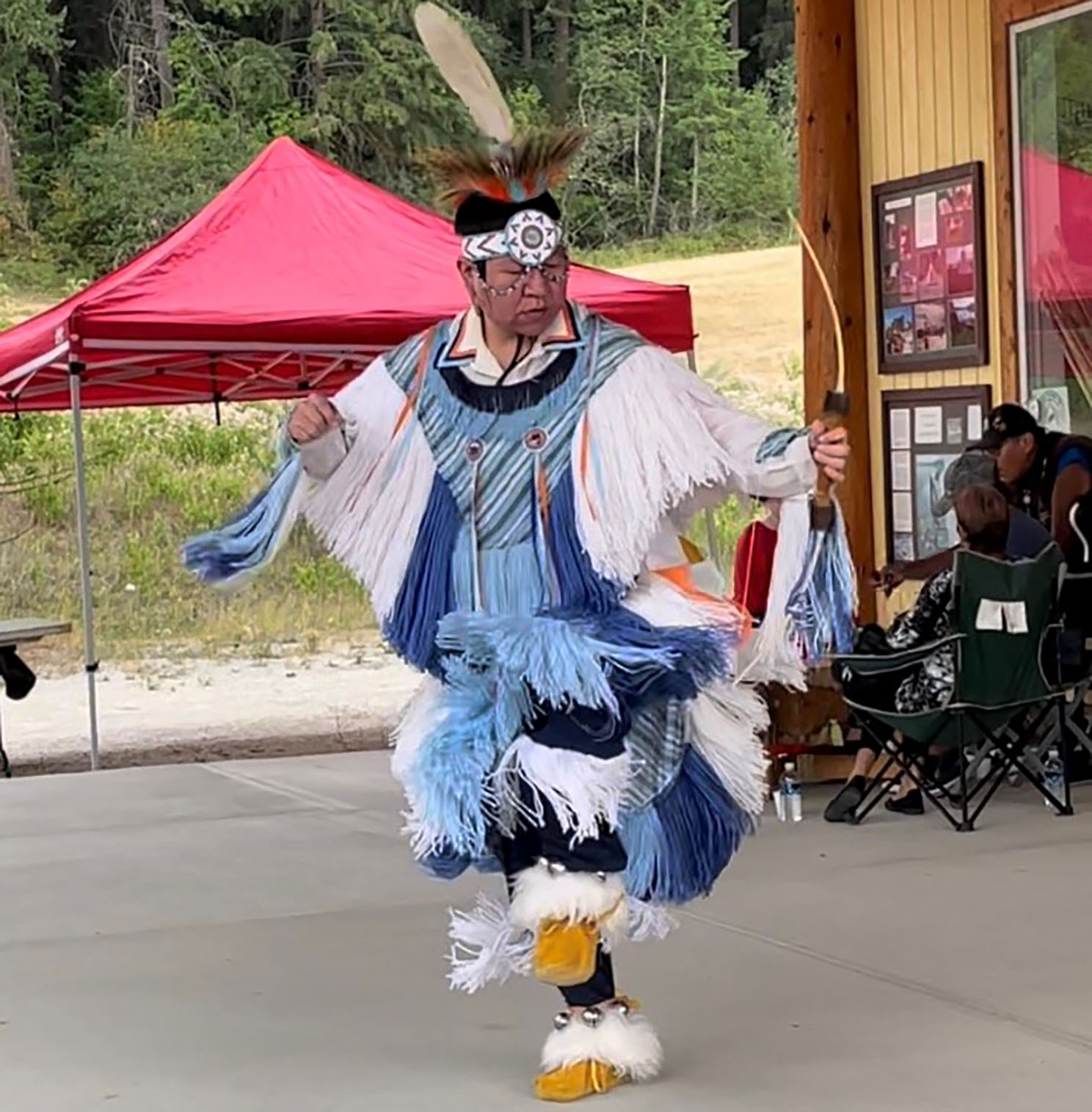 Dancing is also part of what helped bring Jared back from hardship. As a young adult, Jared fell into substance use but has been turning his life around since 2010, the same year he worked a stint at the 2010 Olympics in Vancouver.

A return to his roots and culture, a return to dancing, and the arrival of his son, all helped to bring him back to his community and to health.

“I came back for a pow wow and I had been gone so long…I didn’t have regalia…it was like I had forgotten how to dance,” he says. “But I was at this pow wow and I was just feeling this need and wanting to dance. So, I started dancing again. Being a part of that was so meaningful. Having that ability to dance again was one of the most important aspects of being able to get back into my culture. It reinvigorated me. And having a son was a big factor in relearning the culture.”

Months after that pow wow, Jared and his girlfriend (now fiancé) returned to Creston and Jared threw himself into the community. He was elected to band council for six years before joining the Ktunaxa Nation in his current role as a cultural educator, working with the traditional language and cultures of the Ktunaxa.

It’s a role that brought him together with the team working to open the new urgent and primary care centre (UPCC) in Cranbrook, on the traditional territory of the Ktunaxa. Jared joined the team in the planning stages and connected with language experts and elders in the Nation to provide words and phrases to be used at the centre.

On the Cranbrook UPCC sign, the phrase Ya·kiⱡ ʔawumuʔtiⱡamnamki roughly translates to ‘a place to seek medical help.’

“We have always wanted to preserve and advance our language but non-Indigenous communities haven’t always wanted to create space for that kind of opportunity,” he says. “Now we are in a different era. We live in a time of truth and reconciliation. It’s about embracing each other’s cultures…that ability to be open to all.”

Other phrases will be on the entrance door to the UPCC and inside on different rooms.

“The advancement of the language in a respectful manner is so important. For our future generations to start seeing their language on buildings like this speaks to a different level of esteem that some of us Indigenous people never had in the past.”

The Cranbrook UPCC opened on Dec. 6 in the Baker Street Professional Centre. It features a team-based care environment with physicians, nurse practitioners, physicians, physiotherapists and more treating people who need urgent care within 12 to 24 hours. 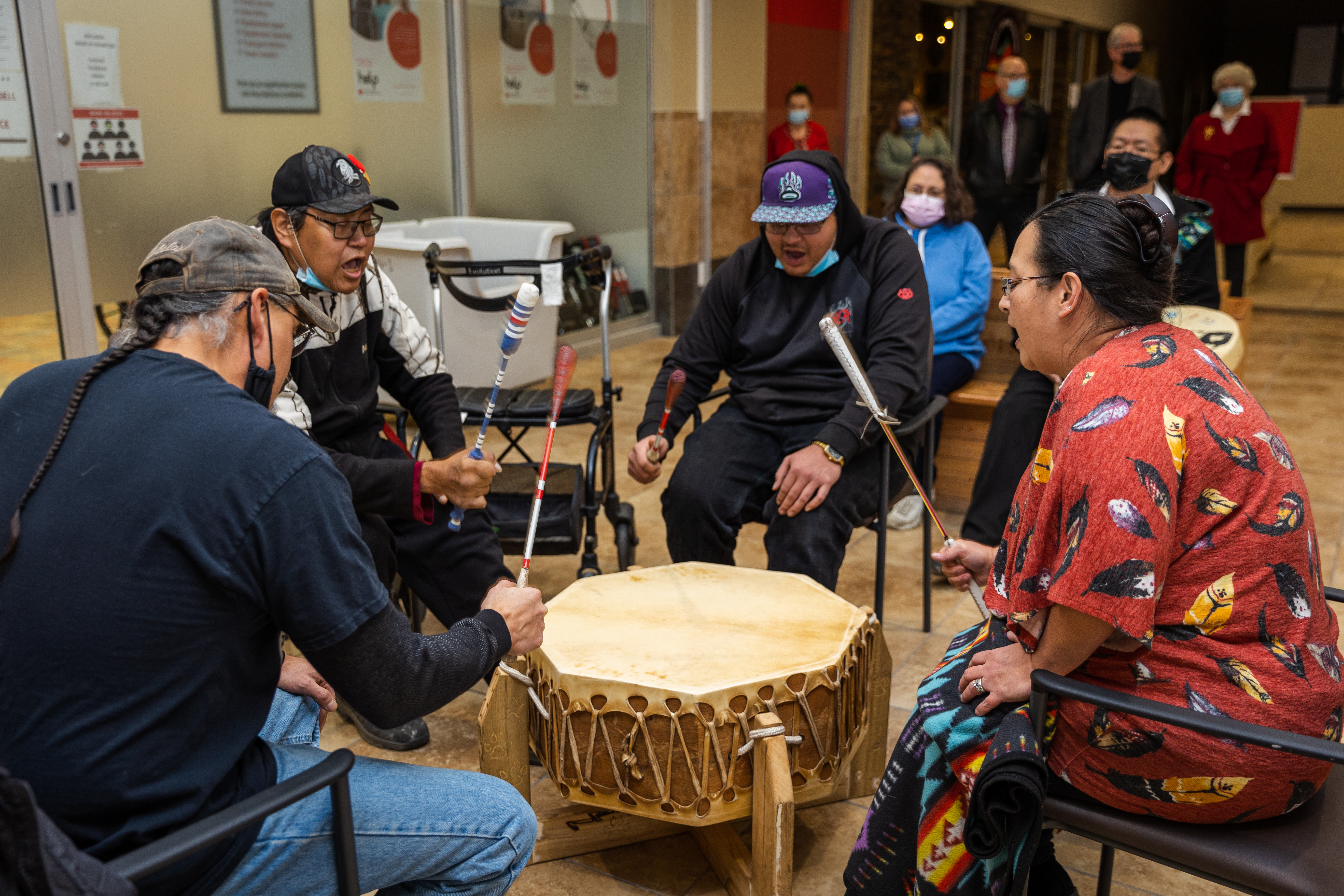 The Numa Kakin’ drum group performs at a Ktunaxa Nation drum ceremony at the Cranbrook urgent and primary care centre on Dec. 10.

Ktunaxa Nation cultural educator Jared Basil worked with language experts and elders in the Nation to provide words and phrases to be used at the new Cranbrook urgent and primary care centre. Here's an example of some the phrases you'll see there, and loose translations of what they mean:

Consultation room sign: “Ya·kiⱡ hakq̓ti·mu”
Where/There is/Place where” to discuss something/ to have a meeting or discussion over a particular issue.

Dr. Amanda Wilmer is no stranger to the B.C. Interior. While she was born in Vancouver, Amanda grew up living in Squamish, Williams Lake, Kamloops…

We are IH is a recognition campaign to spotlight Interior Health employees and medical staff – through pictures and stories. Name: Michaela…

Across our region, local governments are supporting COVID-19 recovery and working hard to keep their communities safe. Whether by encouraging…

We are IH is a recognition campaign to spotlight Interior Health employees and medical staff – through pictures and stories. Name: Carol Kay (she…

Mary Larsen enjoys decorating her workplace, David Lloyd Jones care home, for the holidays. We are IH is a recognition campaign to spotlight…