We are IH: Charles Wincott Favourite Motto: “Live life to the fullest at work and in play and be true to yourself so that you can be true to others.”

At 23 years old, Charles Wincott joined the Navy. During a career spanning more than 20 years, he served as an electronics technician—repairing and maintaining radar, weapon control systems, countermeasures systems and periscopes. 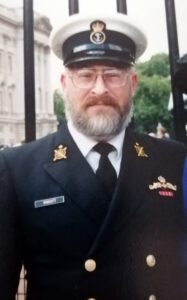 Charles had an affinity for photography and became an intelligence photographer on the ships during deployments. He also taught electronics at the Navel Fleet School in Esquimalt.

“My travels have taken me to all the continents,” says Charles. Highlights included visits to Russia and China, serving for UN forces in Haiti during the embargo in 1993, and living in the United Kingdom for two years while refurbishing the HMCS Corner Brook (a long-range hunter-killer submarine of the Royal Canadian Navy).

“This trade was a natural progression from my military career—perfect for someone with a questioning mind,” he says.

During a short hospital stay, Charles found himself asking, “How is that equipment looked after and repaired?’

His new career in biomedical engineering answers those questions. Charles has worked in Medicine Hat, Alta., several sites on Vancouver Island, and now for Interior Health. He has taken trade-specific training in respiratory, renal, anesthesia, and monitoring systems, among others.

“One of the things that I like most about this trade is the ability to continually learn new things and be challenged with complex problems.”

Last year, Charles took on the role of Supervisor for Biomedical Engineering in IH West—a role with its own set of challenges.

“Like my military role serving in the silent service (submarines), I enjoy working behind the scenes in my current role—to improve the world around me.”

In his free time, he enjoys doing home renovations and rebuilding a 1986 TVR 280i. Charles jokes that “neither seem to ever reach completion.” He also enjoys exploring the outdoors on a quad or side by side—but mostly spinning a good tale over a campfire.

​We would like to thank Charles, and every person who has served our country. Thank you for sharing your stories, and for all that you do for Interior Health and your communities.

Read about other veterans working with Interior Health.