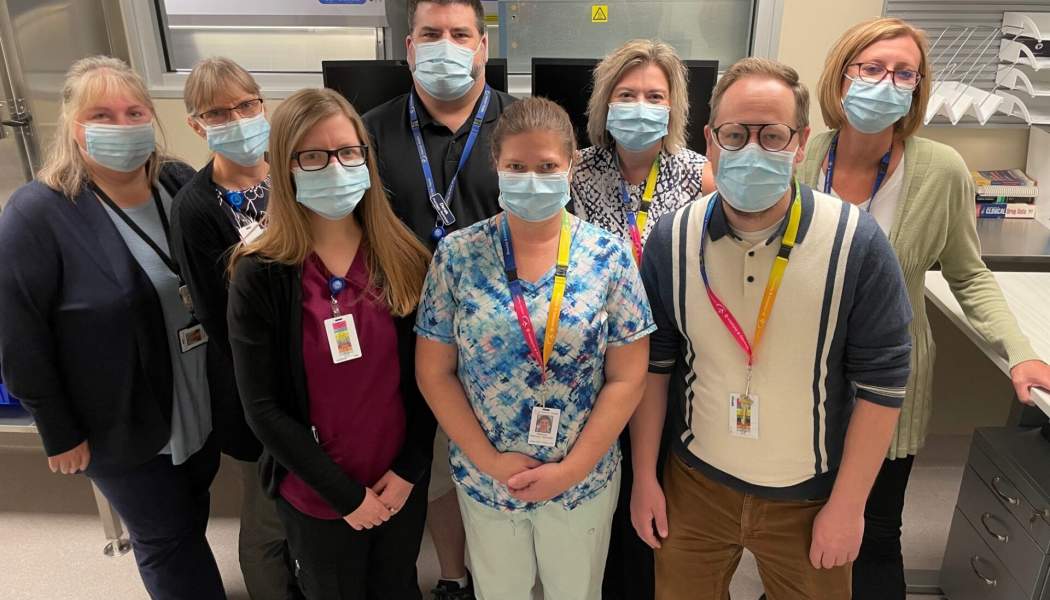 Pharmacist Christine Rutherford is used to thinking on her feet.

As a leader on the pharmacy team at Penticton Regional Hospital, Christine and her colleagues operate in a fast-paced team environment that is mostly unseen by the public, but is an integral part of a person’s safe health-care journey.

From helping to develop medication therapy plans and working out distribution, to mixing more complicated prescriptions and working with people who receive care in the community, the pharmacy is a complex department with the safety of patients as a top priority.

“I love to think on my feet and work towards solving the day-to-day issues that arise,” says Christine. “Every day brings something new. It’s exciting and very rewarding to be helping patients during a time when they most need it.”

The newest thing in the pharmacy department at PRH is the working environment itself. A brand new pharmacy is now open at the hospital, featuring new technology and bigger spaces. Private patient education and counselling rooms allow for confidential consultations with outpatients, while a new relaxing staff room, enhances working conditions and provides a place for health-care workers to rest.

The overall size of the department has increased significantly, allowing more space for the talented team of pharmacists and pharmacy technicians to work.

The pharmacy renovation is one of six pharmacy enhancement projects underway or recently completed in Interior Health, bringing the facilities up to modern standards of care with industry-standard intravenous compounding suites and safe storage rooms. A new pharmacy has also opened at Kootenay Lake Hospital in Nelson while renovations are underway at pharmacies in Cranbrook, Salmon Arm, Trail, and Kamloops.

“This is really about bringing a higher level of safety to the patient. These are state-of-the-art spaces that can be efficiently used to enhance patient safety,” says Sean Gorman, Director of Pharmacy Services, IH East & South.

In Penticton, the pharmacy renovation is part of the second phase of the David E. Kampe Tower Project, the $312.5-million dollar project that saw a new tower open in 2019. Renovations continue in the emergency department, which has also had several new areas open to patients. The entire project is scheduled to complete next spring.

“We’re really excited for the new spaces,” says Christine. “It’s not very often in your career you get to be part of a new pharmacy so I think everyone is excited for the opportunity and the potential this new space brings. One of the big things is we are going to gain efficiency. It’s a nice, bright, open space that will allow our teams the ability to do the great work they do.”